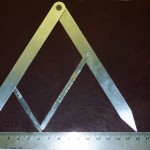 The golden compass is a concept that has been around for millenia, measuring a proportion that was once referred to as the “divine proportion”.

It is a proportion that has been used to build stunning cathedrals, temples, even the pyramids.

The human body is built to this proportion.

Before the “divine proportion” fell out of use, replaced by dry engineering textbooks, it was considered that anything built to this proportion would be not only pleasing to the eye but also spiritually uplifting.

It is the basis for Gerhard Haag’s work in any field he steps into.